Thanks for the votes ~ went for Red#2 based on you

Pick a colour! ~ DMs are so split - here’s anoth

Every year these numbers are nuts to look at. Than 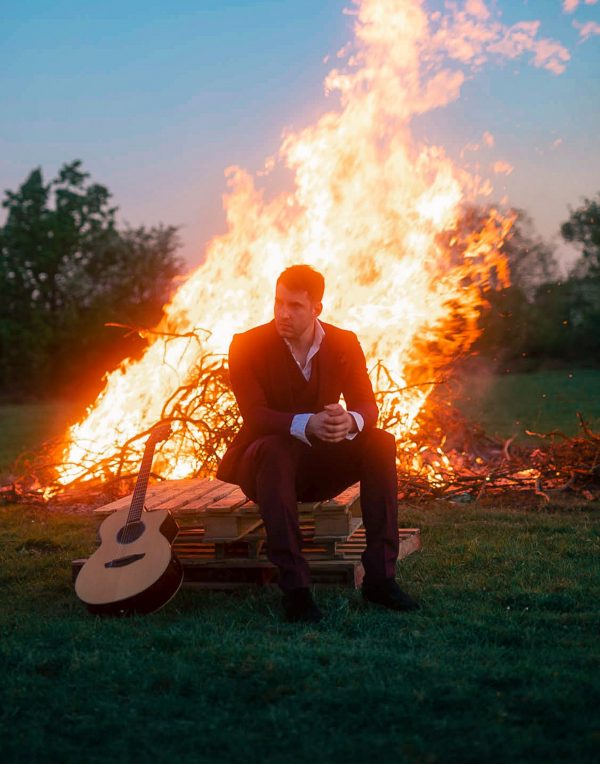 Mark Kovic is a British singer-songwriter and producer, born and raised just outside of London, in a town called Brentwood, Essex UK.

Kovic’s full name (Konstantinovic) originates from his heritage of Yugoslavia (present day – Serbia) on his fathers side, while he has spent his early years between London and Brighton paying his dues for the best part of a decade on the open mic night circuits, finding his feet with the confidence of performing for strangers night on night, year after year. Cultivating his strong baritone voice with nothing but an acoustic guitar in-hand, and encouraged by his family to follow his passion, Kovic realised the importance of writing, and the hard graft of work and dedication to the craft of making compelling music, something that many underestimate in todays world of music.

In a moment of short attention spans and sugar-sweet pop, Kovic’s increasing profile has been far from an overnight success story. Instead he speaks for the independently-minded creators, empowering the idea of building your own success through music, and there is a certain realist honesty in that which seems to cut through when listening to the genuinely felt lyrical choices and soulful and sincere delivery in dark soulful songs like ‘Nobody Like You’ and ‘If You Don’t Love Me’.

Kovic’s first step into the arena of a note-worthy independent artist was his collection of brooding yet joyful songs on debut album ‘Running Underwater’ which has spawned over 40 million streams at the time of writing, an unexpected and rare success story from an artist who made the difficult decision to turn down a major record deal, and attempt to ‘go it alone’. Euphoric tracks like ‘Wires’ and summer BBQ playlist winner ‘Drown’ are examples of this record explores a powerful juxtaposition when placing boundary-hopping songs of almost different genres next to each other. An uplifting record with stunning vocals Kovic’s albums are a mix of light, serious, and somewhere in the middle.

Enjoying a breakthrough moment in 2019, Radio 1 invited Kovic to perform live at the Royal Albert Hall for a special BBC introducing broadcast, as lead single ‘Drown’ found it’s way into one of the feature tracks for FIFA, cementing Kovic’s music in the mind of 50m gamers.

Lockdown brought the kind of time and space for focus, which is no stranger for Kovic when it comes to applying the time needed to complete his next body of work, the soulful and sincere second studio album ‘Playing With Fire’ is an exhilarating string of tracks that take a leap forward into the possibilities of this growing arena-friendly catalogue. This album mixes elegantly plaintive ballads like ‘So Hard Giving You Up’ and ‘Wake Up Tomorrow’ that toils with the psychological pressures the world is too familiar with, while elevating what Kovic’s velvety smooth vocals are capable of with the lead tracks ‘Burned’ and ‘Playing With Fire’. The creation of this second album was made with his ‘A&R’ team, a group of fans and music lovers who have been involved with live streaming events and exclusive content on the process of the albums creation, a body of work forged from pure passion for music, both from Kovic’s growing armada of fans, and himself, an exciting independent artist, with what seems to be a free and limitless horizon for what the future holds.

Official Kovic remixes ~ I’m excited to showcase some of the best remix collaborations here and via my Spotify playlists feat. Hight, Tobtok, Gareth Emery and Kove. Isolated stems for mixes can be requested by emailing contact@kovicproductions.com and we’re currently in the process of working on many more releases.

Check out our Remixed Playlist

We use cookies on our website to give you the most relevant experience by remembering your preferences and repeat visits. By clicking “Accept”, you consent to the use of necessary cookies. We do not sell any data!
Cookie SettingsAccept
Manage consent

This website uses cookies to improve your experience while you navigate through the website. Out of these, the cookies that are categorized as necessary are stored on your browser as they are essential for the working of basic functionalities of the website. We also use third-party cookies that help us analyze and understand how you use this website. These cookies will be stored in your browser only with your consent. You also have the option to opt-out of these cookies. But opting out of some of these cookies may affect your browsing experience.
Necessary Always Enabled
Necessary cookies are absolutely essential for the website to function properly. These cookies ensure basic functionalities and security features of the website, anonymously.
Functional
Functional cookies help to perform certain functionalities like sharing the content of the website on social media platforms, collect feedbacks, and other third-party features.
Performance
Performance cookies are used to understand and analyze the key performance indexes of the website which helps in delivering a better user experience for the visitors.
Analytics
Analytical cookies are used to understand how visitors interact with the website. These cookies help provide information on metrics the number of visitors, bounce rate, traffic source, etc.
Advertisement
Advertisement cookies are used to provide visitors with relevant ads and marketing campaigns. These cookies track visitors across websites and collect information to provide customized ads.
Others
Other uncategorized cookies are those that are being analyzed and have not been classified into a category as yet.
SAVE & ACCEPT